“All I hear are excuses” 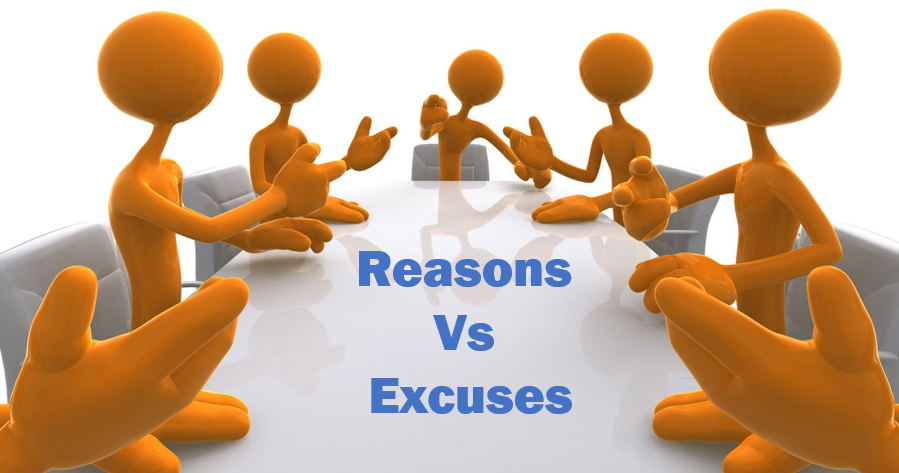 Is your team giving you reasons or excuses and how do you know?

As we continue to pull out of a year for the ages, effective leaders are closely monitoring the new methodologies and processes put in place to adapt to the new reality. As many are realizing, some on their team are adapting well to the new reality and others on the team not so much. As we work with these leaders across multiple industries, both for-profit and non-profit, we regularly hear them state some version of the title quote of this article. Our response is always the same:

What’s the difference between a reason and an excuse?

The most common response to this question is an extended silence followed by “I’m not really sure” or “I never really thought about it” or others to that effect. Aside from the fact that every leader must know the meaning of the words they use, in this case treating reasons as excuses or excuses as reasons, both have significant consequences on their leadership effectiveness.

So, let’s explore the difference and why it matters. A reason is an explanation of what happened and why it happened with the person taking full accountability for where things are at that point in time. While some factors may be within their direct control, other factors may not. Either way, accountability is in full display. An example would be someone who is regularly on time or early to work arrives late. Their reason is an accident that occurred that ate up all the extra time they usually give themselves for unforeseen circumstances. It didn't even show up on the traffic app they regularly use.

An excuse on the other hand occurs when a person takes no accountability for their actions when thy have full control over the factors leading to the excuse. Often, there is an attempt to divert blame elsewhere. A typical example is the associate who is habitually late while not allowing enough time to navigate morning rush-hour traffic. Using traffic as a reason without adjusting to things in their control (leaving earlier, using traffic apps to decide, etc.) ends up being nothing more than an excuse.

What are the leadership ramifications of not knowing the difference? Let’s look at the scenario where leaders treat reasonable explanations as excuses. This typically occurs when the leader is so singularly focused only on a result, they simply don’t want to hear why the result has not been achieved. To this leader, everything is an excuse until the result is achieved, even in light of reasonable explanations outside the team’s direct control. The message to the team is their work is not valued and the leader cares little for them as people, merely cogs in the machine. While this may not be the intended message, ignoring the impact negatively impacts overall team performance!

Another scenario worth mentioning occurs when the leader accepts excuses as legitimate reasons. This leader is likely to be one who wants to get along with everyone on the team and/or is not comfortable with difficult conversations. This leads to low accountability on the team based on the absence of consequences for missing results or goals. A hybrid scenario to this occurs when the leader allows some members of the team to get by with excuses while the rest of the team is held to task. Again, ignoring the impact of these leader behaviors negatively impacts overall team performance!

Probably the worst scenario in all this is when the leader is the one making excuses to their team and pretending the team won’t notice. In this scenario, the leader actually ceases being a leader because they are not holding themselves accountable to their team. It is a form of lying, and thus a lack of integrity and character, when the leader knows they erred in some way and try to excuse their way out of it to their team!

Life plays out very differently in the new reality. Effective leaders know stuff happens and not every strategy goes according to plan. They also know when they hear reasons, there is an appropriate response that engages the team to work through the obstacles in their way. Effective leaders also know when they hear excuses, they call them on the spot while highlighting the consequences of continuous excuse-making.

Is your team giving you reasons or excuses and how do you know? If you’re not sure, we can help!

How do you feel about this post?
Happy (0)
Love (0)
Surprised (0)
Sad (0)
Angry (0)
Tags:
Effective Leadership Leadership Accountability No Excuses Effective Communications Accountability
“Experience is not what happens to you...
"Trust is Earned...

“Execution is the ability to mesh strategy with reality,...

“Trust is the glue of life.

A Book of Values